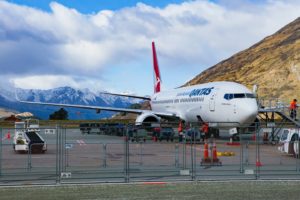 The price of Qantas Airways Limited [ASX:QAN] has hit its lowest point for 2019 in what has been a turbulent day of trading for airlines. At time of writing, Qantas shares were down 5.43%, a 32-cent drop, to trade at $5.57 per share.

With no news out of the company, the drop in share price was likely sparked by Air New Zealand announcing downgraded earnings guidance.

AIZ announced this morning it had downgraded its earning for tax guidance to $340–400 million from the range of $425–525 million.

The downgrade, prompted by global Rolls-Royce engine issues, has continued to challenge the airline both commercially and operationally.

‘We are concerned with our latest outlook which reflects the softer revenue growth that we are seeing in the second half of the year. Therefore, we have commenced a review of our network, fleet and cost base to ensure the business is on a strong footing going forward.’

Free report: Aussie stock picker Sam Volkering (with gains as high as 1,431% in the last 18 months) reveals what he believes are his next four big potential winners.

Investors likely fear a similar fate for Qantas to that suffered by Air New Zealand in its next investor update.

As of November 2018, Qantas had 12 Airbus A380s in service and eight on order, as well as eight Boeing 787s in service with another six on order.

AIZ, despite the engine issues, posted decent customer growth in their update this morning. AIZ recorded 1.7 million customers carried in December 2018, up 4.5% in comparison to the 12-month previous corresponding period.

This is not the first time we have heard about issues affecting Rolls-Royce engines. Airlines have been battling problems with their Trent 1000 and Trent 900 engines for years.

Regardless of the disruption caused by ongoing global engine issues, Qantas posted strong Q1 FY19 revenue, up 6.3% to $4.41 billion versus prior corresponding period.

This growth was likely helped along by their operational excellence, minimising the downtime for planes due to engine issues.

PS: Check out this must read report on the best ASX stock for 2019. Sam Volkering has already bagged 1,431% in the last 18 months. Could his next four picks be just as lucrative? Click here to download your free report now to find out.

Air New Zealand [ASX:AIZ] confirmed it expects to make a net loss of less than $750 million in FY22.

Iconic Australian airline Qantas Airways [ASX:QAN] is setting out to reach net-zero emissions by 2050, with an interim target of 25% less carbon emissions by 2030.

Qantas is considering further land sale and development proposals as it seeks to strengthen its balance sheet. Qantas Airways [ASX:QAN] share price is currently trading at $5.71 per share, up 2.33%.

The Qantas Airways [ASX:QAN] share price is rising today despite an FY21 underlying loss before tax of $1.83 billion as the market senses a recovery.

QAN Shares Down: Staff Stand Down Amidst Border Closures (ASX:QAN)

The Qantas Airways [ASX:QAN] share price fell 2% today after it was announced 2,500 Qantas and Jetstar front-line crew would be stood down.