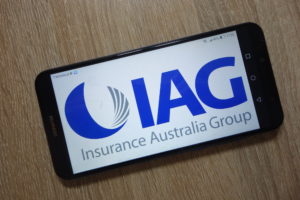 The share price of the Warren Buffett-backed Insurance Australia Group Ltd [ASX:IAG] has surged higher this morning on the back of mixed half-year results.

IAG is a general insurance group, with operations in Australia, New Zealand, and Asia. The Group is behind the NRMA, CGU, Swann Insurance, and WFI insurance brands among others.

In its half-year report this morning, IAG announced a 6.7% increase in revenue, up from $8.04 billion to $8.58 billion in the corresponding period.

Despite the jump in revenue, net profit after tax took a hit of 9.3%, to $500 million in the six months ended December 31, compared with AU$551 million a year ago.

A decent chunk of profit loss can be attributed to a 33% decrease in IAG’s insurance profit, down $249 million from the last corresponding period to $496 million.

The company said that their insurance margin was hit hard, primarily reflecting an adverse net natural peril claim cost outcome, which was $110 million above its allowance.

IAG flagged $169 million in costs after it received more than 6,500 claims following the Sydney hailstorm in December.

The Insurance council of Australia declared the storm a catastrophe, with tens of thousands of claims made and an eye-watering damage bill causing havoc for insurers.

On the upside, investors seemed pleased with IAG’s underlying performance. According to Bloomberg, the market expected the insurer to deliver a half-year profit of $395.5 million — a target it clearly exceeded.

On the downside, this did not translate to dividend growth. The company slashed its interim dividend to 12 cents, from 14 cents per share.

What’s next for IAG?

In the wake of the financial services royal commission, IAG’s CEO Peter Harmer says the company will spend $15 million in regulatory compliance costs during the first half of this year. And this cost could become a fixture.

‘Our view at the moment, with the information we have from the royal commission… is that we see it as a permanent part of the cost base going through, an ongoing additional cost of running our company,’ Mr Harmer said.

IAG has maintained an increase in GWP of 2–4% with a reported insurance margin of 16–18%. Although, the company did not provide guidance on its net profit most likely due to the variability in the insurance industry.

Back in August IAG sold its Thailand business, which added $208 million to its books. It expects to complete the sale of its Vietnam and Indonesia business by the end of the current financial year.