Home | ASX Market Updates | A Look at the Myer Share Price: Can it Keep Going Up?

A Look at the Myer Share Price: Can it Keep Going Up? At time of writing, the share price of Myer Holdings Limited [ASX:MYR] is up a further 1.74%, trading at 70 cents.

The Myer share price took off at the beginning of March (where the arrow is): Today, we will be looking at the Myer share price and its prospects for a continued run along with a look back on what led to the rise in the first place.

After sustained pressure from Solomon Lew of Premier Investments, the Myer share price showed signs of life following the release of its half yearly results in early March.

It indicated a few positive things that have stood it in good stead over the last month:

These factors may have convinced investors that the current Myer board is turning things around, despite the relentless commentary from Mr Lew.

Added to the mix was a surprise bounce in retail sales — including a 3.5% surge in department store spending in the ABS’s February data (released in early April).

It will be intriguing to see the March retail sales figures when these are released in May.

How much juice is left in the run?

From the three-year chart above, it appears that there could be some resistance around the 75-cent mark.

This would mean that the run that Meyer has been on may only last a short while longer.

It is important to remember that household disposable income is coming at an increasing premium for retail, as Australia’s household debt-to-income ratio is one of the highest in the world: 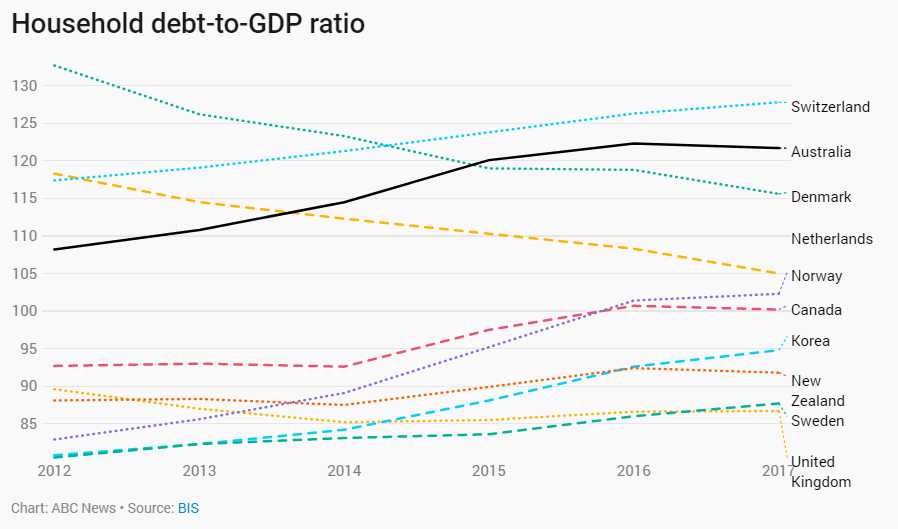 While this may explain the rise of companies like Afterpay Touch Group Ltd [ASX:APT] and Zip Co Ltd [ASX:Z1P], it may well also put a cap on Myer’s future earnings and share price in the mid-to long-term.

The market could have been pricing-in improved earnings over the last month, and it may be sensible to evaluate your position before Meyer’s next earnings announcement.