Could Australia Replace China as the Rare Earth Supplier? 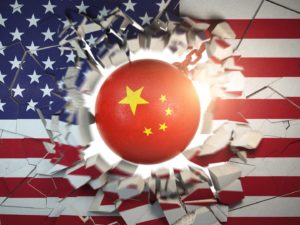 You can tell it hasn’t been operating for years by the rusty tin shacks peppered throughout the hillside.

Once a gold mining site, Mountain Pass has been dormant for almost a 100 years.

But now, new owners are switching the lights back on.

The site is getting a face lift…new trucks, new drills, new facilities.

It represents a glimmer of hope for the US. It might even be good news for Aussie resource stocks too.

It won’t be gold, though.

At Mountain Pass, the owners will be looking for something far more valuable and useful.

The new project could be as simple as digging a big hole in the ground, but as complex as the most sophisticated industrial chemicals.

Free report reveals three tiny mining stocks set to ride the lithium frenzy. Click here to find out who they are.

Shifting the entire US supply chain

This is the stuff that goes into your smartphone, wind turbines, electric vehicles, fighter jets and various military technologies.

Problem is China controls the stuff. They produce about 80% of all rare earths and control 90% of the processing.

And Trump is pissing them off real good.

According to Bloomberg, China has a plan…

‘Beijing has readied a plan to restrict exports of rare earths to the U.S. if needed, as both sides in the trade war dig in for a protracted dispute, according to people familiar with the matter.

‘The government has prepared the steps it will take to use its stranglehold on the critical minerals in a targeted way to hurt the U.S. economy, the people said. The measures would likely focus on heavy rare earths, a sub-group of the materials where the U.S. is particularly reliant on China. The plan can be implemented as soon as the government decides to go ahead, they said, without giving further details.’

‘Currently, it’s still just a possibility that China may ban or do some kind of restrictions…But if it does happen, then we believe prices of rare earths will surge.’

Of course, ‘China’s plan’ might just be noise at this point…journos spinning rumours into a story.

Those over at The Washington Post are of the opinion that Chinese supply restrictions might do little to nothing in hurting the US’ need for rare earths.

‘It is also hard to imagine any embargo being foolproof. Despite official Chinese attempts to stamp out illegal production, rogue operations last year produced an estimated 60,000 tons of rare earths, according to the U.S. Geological Survey. That means American customers would almost certainly obtain some supplies in the event of an export ban.’

But if the Chinese rouges are not up for it, then what about Australian and US producers?

The Mountain Pass efforts show you the US is not afraid to painfully wean themselves off Chinese supply.

Aussie supply is another option for them…

Word is, they’ve already tapped us on the shoulder to set aside piles of rare earth when we have some.

‘Sources have confirmed a report by The Financial Times that the US State Department is working with Canada and Australia to better understand what critical minerals each country has and how these can be developed.

‘The three countries have sought to bring together high-level government support for reducing the reliance on China for strategic materials.

‘Australia’s response to the US call to arms has seen Austrade put together a prospectus of so-called “critical minerals” which could be developed with the help of capital from the US, Europe, Japan or South Korea.

‘To speed these developments Austrade has led trade delegations to the US and north Asia and will take another group to Europe later this month.’

Is this the rare earth opportunity you’ve been waiting for?

My colleagues Sam Volkering and Ryan Clarkson-Ledward over at Australian Small-Cap Investigator have been waiting for this one…for about 15 months!

Take a look at what they told subscribers of their Microcap Trader advisory service 15 months ago:

‘So while the world waits to learn more about how this war will unfold, or even if it will unfold at all — we’ve been looking at how it could play out to our advantage. And we believe that if Trump wants any hope of winning his trade war, he will need some allies. What little he has left anyway. Which is why Australia could in fact, benefit from all of this.

‘The recent talks (before the declaration of war) between Trump and Malcom Turnbull highlighted a new crisis for the US. China’s stranglehold over ‘rare earths’. A collection of metals that are crucial for products like electronic devices, electric cars and military products, like missiles.’

‘15 months later, it would seem everyone else is coming to a similar conclusion,’ Sam and Ryan wrote on Tuesday.

Now that the mainstream has caught up, you’ll need a new angle, a new way to think about rare earths and how you could position yourself to benefit in the coming months.

FREE report: Why uranium is destined to bounceback in 2019 (big time). Click here to claim your free copy.