Things like driverless cars and computing power got a mention.

But these are not the artificial intelligence (AI) dreams for Baidu.

The dream is creating a learning machine, which can crunch vast amounts of data and improve search algorithms far better than any coder.

Yet, right in the middle of the chief’s speech (Robin Li), an attendant got up on stage and started pouring water over his head. 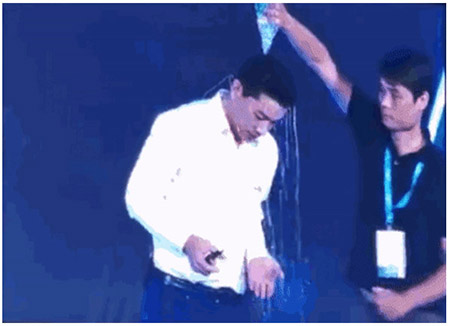 It wasn’t some clever theatrical ploy.

The crowd only gasped as Robin stepped back and said in English (his speech was in Cantonese) ‘What’s your problem?’

Men in uniform were quick to deal with the brave water wasting culprit.

And like a trooper, Robin wiped the water from his face and soldiered on.

‘As you can see, different unexpected things will happen as AI advances. But we are unswerving in our determination to move forward. We firmly believe that AI has the power to change everyone’s life,’ he said.

Biotech stocks: how to find the winners (and avoid the losers). FREE REPORT

Baidu was one of the BATs.

I guess they still are a part of the BATs…technically. But the group has lost its lustre of late.

Like the FAANGs, Baidu, Alibaba and Tencent, were the typical set and forget strategy.

These were the stocks that you couldn’t lose on. Just buy, and in time it’ll come good.

So, fund managers in need of performance bought the BATs along with the FAANGs. And they thought themselves smart because of it.

Here’s how the Australian Financial Review (AFR) describes it:

‘There was a time when all an international fund manager had to do to achieve top quartile performance was to buy a bunch of Chinese internet companies and sit back and enjoy the ride.

‘All these companies had sales growth in excess of 30 per cent per annum and the outlook was rosy thanks to their dominant positions in their chosen sectors, including online payments, social media platforms, e-commerce sites and online search.’

Baidu also has one of the best comparisons in the world.

Anyone asking what Baidu was could be met with the quick response of ‘It’s China’s Google’.

You know, that search engine you use multiple times a day. The company that has no competitor in sight, even around the world.

But have you seen Baidu’s share price recently? You definitely wouldn’t think this is a Google clone.

Let’s just say sellers have poured more than a few bottles of cold water over this one. Had you told me Google lost 60% of its value, I’d be pounding down the doors at HQ using all the money I could borrow to buy a piece of the company.

That 60% drop for Baidu puts it at a multiple of just 10-times earnings.

To put this into context, Google’s PE is more than double that. Anyone buying Baidu during the heady days of 2018 thought the stock would trade for at least 30-times.

Note: This is a great example showing what PEs and a whole bunch of other market ratios really are. These are not the sole ratios to base your purchase on. Rather, these are ratios driven by sentiment and expectations of growth.

But sentiment and optimism aside, if earnings grow by just 15% (half of their recent history) from here, an investment payback in Baidu is a little over five years. That means in less than six years, you theoretically recoup your entire investment. Anything thereafter is free money.

Now, that might sound like a long time. But a bit over five years for a growing internet stock…in these heady markets. That’s almost unheard of!

If Baidu really is the Google of China, why aren’t investors buying the growing internet stock in droves? Why aren’t they jumping at this opportunity? In the 2011 paper, ‘In Search of Excellence — Google vs Baidu’, the author lays out how each businesses are different.

‘First, Baidu and Google differ in the way they sell advertising to customers. Google distributes a great deal of the company’s advertising services through a direct sales structure, whereas Baidu sells ads in China largely through distributors.

‘Second, in direct contrast to Google’s practice, Baidu does not require clients to use credit cards to pay for their ads.

‘Third, Baidu offers paid search placement, or the selling of search engine results for particular keywords to the highest bidder, which is not offered by Google.’

A fourth major difference is how Google and Baidu grew up and compete today. Google had to compete with the best in the industry. They had to develop something that was better than their competitors.

And rather than focus on advertisers, users were Google’s chief priority. If users didn’t like their browser, or their search results, they could easily switch to Yahoo or Bing.

Baidu, while they fought tooth and nail to grow, have had a pretty easy life at the top. They don’t compete with the best as China’s ruling party bans Google from the country.

They also conform to many communist filters. Then, once the government gives Baidu the OK, the company prefers to service advertisers first and users second.

That’s how it seems, anyway.

It’s good for short-term profits. But it’s not good for usability. And it’s the users, if they remain loyal to Baidu, who will ensure long-term prosperity.

Now in 2019, their lack of user focus is coming back to bite them on the bum.

Chinese internet users are not like the ones in the US or Australia. The Edge Markets explains:

‘Another more uniquely Chinese phenomenon, the pace of growth of websites and webpages in China has slowed dramatically, which means there is a smaller volume of information to index for a search engine such as Baidu. That is because the Chinese internet is different from the Western one that we outside China use. In China, superapps like WeChat are soaking up all the information online rather than the webpages. Chinese users spend more than 95% of their time on superapps on their mobile devices rather than webpages through a web browser.

‘Moreover, a big portion of China’s e-commerce and social media ecosystems are walled off from Baidu’s searching index crawlers.

‘In essence, web search in China has splintered inside the apps. Baidu cannot index information within WeChat, whereas Sogou, a search engine in which Tencent has a stake, can. So, it is no surprise that less search has led to a lot less search advertising for Baidu. Online advertising at Tencent’s social and media platforms is growing 40% annually. Ads for Tencent’s WeChat grew 65% last year and are forecast to grow 38% this year, albeit from a lower base.’

Then there’s the mentality of using users as a commodity, rather than treating them like they’re the most valuable asset in the world.

‘It [Baidu] suffered severe damage to its reputation from a number of incidents and these were described in its 2018 annual report published in March. The company said: “In 2016, Chinese media reported that a Chinese college student had died from cancer following unsuccessful treatment received at a hospital that the student had found through paid search listings on Baidu.

‘“In 2018, Chinese media reported incidents where users had been defrauded by health care and logistics service providers that they found through search listings on Baidu.’’’

According to The Edge Markets, this is why Li had water poured over his head. The culprit was angry about ‘Baidu’s policy on advertising fake medicine.’

Then there’s the stories of Baidu editors sending out fake news to boost traffic, which they could then shop around to advertisers. South China Morning Post writes:

‘Baidu, China’s largest search engine, has apologised after its news aggregator posted a fake message claiming to be from the father of an abducted nine-year-old girl whose body was found on Saturday.

‘In a statement on Saturday evening, the company said it had wrongly published a message on an account without the owner’s consent and the editor responsible had been sacked.’

This is not how you run a business.

No matter how dominant, how strong of a brand you have.

Customers, users, buyers, or whatever you want to call them, come first.

It’s only in extreme instances, examples like Moody’s credit ratings or the Bloomberg Terminal, that companies can get away with treating their customers as commodities, rather than acting as if customers are their livelihood.

Baidu has seen firsthand what can happen when you abuse the user.

Yet, with all this said, Baidu is not worth nothing. It’s entirely possible that they turn things around.

Maybe buying the stock now is a smart decision. Of course, you’d have to do a bit more research on the company and their advantages, mind you.

But this is not an article about whether you should buy Baidu or not. It’s a cautionary tale of how even the strongest businesses can fall.

The strong Aussie growers like Afterpay Touch Group Ltd [ASX:APT], REA Group Ltd [ASX:REA] and Appen Ltd [ASX:APX], they can all lose their way. Paying 30-, 40- or 50-times earnings for any one of them, is a big risk in itself.

By paying more now, you’re decreasing your odds of investment success as growth has to work even harder to justify the initial high purchase price.

Be aware of what you buy. Don’t set and forget. Monitor.

BUY TODAY: This ASX-listed AI company that can build a three bedroom house in 72 hours! Click here to find out more.

Money Morning is Australia’s most outspoken financial news service. Your Money Morning editorial team are not afraid to tell it like it is. From calling out politicians to taking on the housing industry, our aim is to cut through the hype and BS to help you make sense of the stories that make a difference to your wealth. Whether you agree with us or not, you’ll find our common-sense, thought provoking arguments well worth a read.

Money Morning Australia is published by Port Phillip Publishing, an independent financial publisher based in Melbourne, Australia. As an Australian financial services license holder we are subject to the regulations and laws of Corporations Act and Financial Services Act.