Today is a public service announcement.

We’re warning you about a scam that’s currently doing the rounds (again). We’re very worried about people falling for it, therefore we want to make sure you know about it.

That’s why subscribers to our advisory services, Sam Volkering’s Secret Crypto Network and Revolutionary Tech Investor, will also be getting this information. In fact, I’m doing my best to spread this information as far as I can.

I believe that far too many Aussies get ripped off from pathetic, lowlife scammers and I want to try and do my bit to help.

This comes as the Australian Competition and Consumer Commission (ACCC) made an announcement on Tuesday about scammers operating in Australia. The ACCC report explains:

‘Australians are set to lose a record amount to scams in 2019, with projections from losses reported to Scamwatch and other government agencies so far expected to exceed $532 million by the end of the year, surpassing half a billion dollars for the first time.’

Worth noting is that these scams aren’t just crypto scams. In fact, the ACCC say that ‘Cryptocurrency investment scams have seen record losses, with reports to the ACCC alone of $14.76 million between January and July 2019.’

While that’s a lot and a new record, it does show that you’ve got to be careful in all markets.

But here’s the reason why we thought today was an opportune time to remind you what a scam looks like.

We received an email this week from a subscriber. He was thrilled to start on his crypto journey. He was new to crypto. But he was also on the brink of getting sucked into a scam right off the bat.

That would’ve been devastating. Not only could he have potentially lost money, but also could’ve possibly destroyed his whole step into the crypto world. And for us, that’s an opportunity we don’t want people to miss out on because of lowlife scammers.

When you know about them and view them, scams are pretty easy to see. But they often play into people’s emotions, create FOMO (fear of missing out) and apply sly tricks to get you to act in a way that you probably wouldn’t normally.

Then when they hook you in, they do everything to never let you go.

The scam I’m going to show you about today is an easy one to spot, too. But you’ll also see how devious they can be with their scam.

In the email from the subscriber, he asked a simple question…

‘Could I direct him to the websites that show the bitcoin investments Andrew Forrest had been making?’

Straight away this rang alarm bells for me. Just the mention and linking of an ASX-listed company chairman and bitcoin didn’t seem right. But with a very brief and simple search, it was easy to find this is one of the latest scams going around.

What was even more concerning about this particular scam is the fact just a day later I’d seen the email appear in my inbox.

So, before we dissect this scam, let’s take a look at it. There’s a good chance you’ve also seen or maybe heard about it recently. 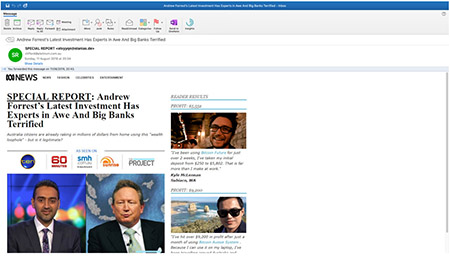 On the face of it, this seems reasonably legit. It looks like a report from the ABC News site. It’s got ‘As seen on’ and Channel 10, 60 Minutes, SMH, Sunrise, The Project, all mainstream mass market news outlets. Then there are even ‘reader results’ over to the side.

It’s a special report which is designed to get your interest. And the pictures of Forrest and Waleed Aly looks like some kind of live cross on The Project.

There’s even a semi-legit looking email address on there from platinum.com.au. Don’t be fooled by all this. It’s not from a real email address.

Let me be clear, this is a scam.

The image links out to a scam site, btcisfuture.com.

And on that scam site, all the tricks and trappings of a scam are front and centre, fake news report, fake ‘security’ images from the likes of Norton and McAfee, designed to make you think the site is safe and legit.

There’s also countdown clock with a fake registration deadline. That supposed to get your FOMO to kick in. Loads of stock images, fake testimonials, fake ‘profit results’, everything is fake and fraudulent.

In tomorrow’s Money Morning, we continue to dissect this scam and point out the red flags visible to you and how to look out for them in all kinds of scams.

Make sure to read tomorrow’s Money Morning and keep safe out there.

He’s not interested in boring blue chip stocks. He’s after explosive investments; companies whose shares trade for cents on the dollar, cryptocurrencies that can deliver life-changing returns. He looks for the ‘edge of the bell curve’ opportunities that are often shunned by those in the financial services industry.

But that’s not where Sam’s talents end. Sam specialises in finding new, cutting edge tech and translating that research into how the future will look — and where the opportunities lie. It’s his job to trawl the world to find, analyse, research and recommend investments in the world’s most revolutionary companies.

The Future of Food: What to Expect from Australia’s Latest Shortage