At time of writing, the share prices of ASX-listed nickel stocks like Independence Group NL [ASX:IGO] and Western Areas Ltd [ASX:WSA] are surging on news that Indonesia will move to ban nickel ore exports by the end of December.

The nickel price has surged in the last three months, just look at the chart below: We look at the prospects for ASX-listed nickel stocks, the role Indonesia plays in the global nickel market and nickel’s increasing prominence in next generation lithium-ion batteries.

How to buy into the NEXT battery boom (free report)

Western Areas and Independence Group Share Prices Up on News

Below you can see how the Western Areas share price compares with the Independence Group share price over the last three months: You can see they have gone through periods of strong correlation before both went vertical today.

These nickel stocks were reacting to news that broke on Friday.

Reuters reports that Indonesia, that the world’s largest supplier of nickel, would expedite an export ban on mineral ores moving the date up to December from a previous date of January 2022.

Also driving interest in these stocks was news that the Ramu battery nickel processing plant in Papua New Guinea may face closure after mine waste spilled into a nearby bay.

The operation produces around 35,000 tonnes of nickel a year.

Last year, Indonesia accounted for 21.5% of total nickel exports followed by the Philippines with 15.7% and New Caledonia with 14.8%.

Australia’s nickel exports made up 6.6% of the total.

Interesting to note is that despite Indonesia’s dominance, according to the US Geological Survey, Australia has immense reserves of the metal: 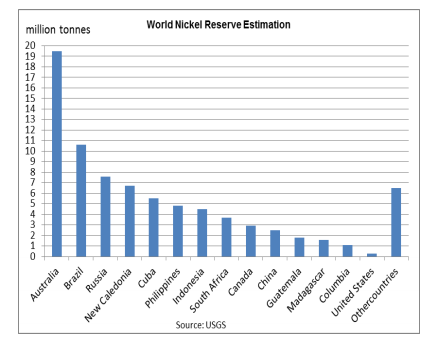 With this in mind, ASX-listed nickel stocks could be well-positioned for future success.

Independence group derives the majority of its EDITDA from a 100% owned nickel-copper-cobalt mine called Nova.

Meanwhile, Western Areas has two mines in production called Flying Fox and Spotted Quoll, which cranked out 23,208 tonnes of nickel over the FY19.

It has a major project called Odysseus in the pipeline, which is slated to begin producing its first nickel concentrate in late 2022.

We previously flagged Independence Group as one stock that stood to benefit from a forecasted divergence of nickel supply and demand.

Below you can see the growth in projected future demand for nickel from the battery market: New models of lithium ion batteries are being deployed that increasingly rely on nickel.

This refers to the ratio of elements that make up the cathode of the battery.

Although NCM 811 lithium ion cells make up only 1% of the EV battery market, their market share is up 251% in the last year.

If you want to learn more about these batteries and get the names of other nickel stocks, be sure to download our free report on nickel. It explains demand and supply dynamics in the coming years and identifies potential winners if the price of nickel surges.