The Westpac share price has been grinding higher since December following the conclusion of the Banking Royal Commission: Westpac is now outperforming the financial sector as a whole, up more than 23% since December. Today, we make the long-term case for avoiding WBC shares based on demographics and technology.

Westpac share price up again today, but it’s still down from its 2015 peak

It’s important to put things in perspective — the Westpac share price is still down from its early 2015 price, where it was just shy of $40.

So had you invested then, you’d be down around 25% not including dividends.

Indeed, a large appeal of the Big Four stocks is their regular dividend payments. But even this may be under threat. Here’s why.

Let’s have a quick look at Westpac’s competitors though.

These stocks include National Australia Bank Ltd [ASX:NAB] (which is just off a 52-week high, but peaked in 2007 before the GFC), Australia New Zealand Banking Group [ASX:ANZ] (which has underperformed compared to its peers since December), and Commonwealth Bank of Australia [ASX:CBA] (which has done the best since the turn of the year).

You can see their share price performance relative to each other below: 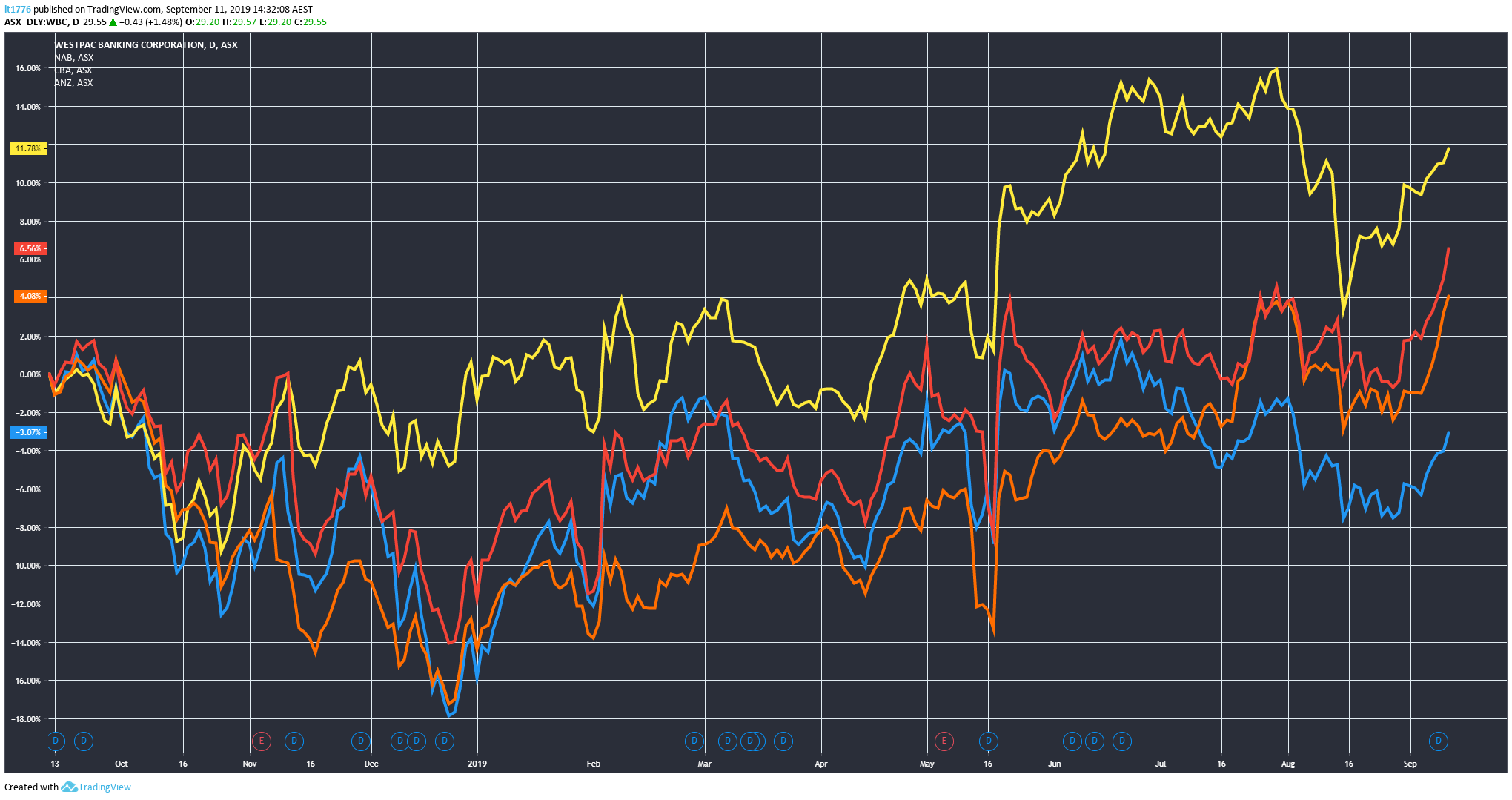 As you can see, Westpac has done reasonably well over the last nine months.

But despite its recent climb, the Westpac share price could face long-term headwinds.

Adios dividends: why traditional income stocks are in the firing line (free report)

Bill Gates hit the nail on the head about banks

There’s a seismic shift afoot in the world of finance that is bubbling beneath the surface.

Consider the following Bill Gates quote from 1994: ‘Banking is necessary, banks are not.’

The point that Gates was making here, I believe, is the crucial distinction between banking as a service versus banking as an institution.

They don’t need brick-and-mortar branches and could be the death of credit cards as younger people grow more fearful of debt.

Which is why the Big Four are closing branches, automating processes and trimming their workforce.

There are other strong hints that no amount of belt-tightening can save the banking dinosaurs too.

For instance, some banks may look to co-opt fintech competition, like CBA’s recent investment in Klarna’s Australian operations.

But these acquisitions will likely happen either too late, or at a significant premium.

And which shares would be better to hold in this scenario? The growth company that is the take-over target? Or would you prefer the outdated warhorse that relies on acquisition to update its legacy tech?

The answer should be apparent.

What’s more, with the RBA on a fast-track to a nil cash rate — even the immediate future looks clouded for the Big Four’s margins.

You can find and in-depth look at factors affecting Westpac’s ability to maintain its dividend payouts here.

PS: We cover three exciting fintech stocks in this free report as well.

Is there a BNPL Bubble? Get Your Stop-Losses in Place

A Guide to the Afterpay Cap Raise, Trading Halt and Director Share Sale

Why the Government May Be Behind Afterpay’s Incredible Rally