Like the researcher Paul Baran, who came up with the idea for the internet, Elon Musk also has plans to save humanity from all-out war.

He wants to colonise Mars…

‘It’s important to get a self-sustaining base on Mars because it’s far enough away from earth that [in the event of a war] it’s more likely to survive than a moon base,’ Musk said.

‘If there’s a third world war we want to make sure there’s enough of a seed of human civilisation somewhere else to bring it back and shorten the length of the dark ages.’

The plan is to first send two rockets in 2022. The aim will be to find and harvest water. Then if that’s successful, Space X will send four more rockets in 2024.

Two will house crew. The other two will house equipment. And from this start the build-out begins. Not just a tiny research lab, but a whole city… I’ll admit, I first thought this was such a pie in the sky idea. But now I’m not so sure. Maybe we will get to Mars. Maybe Musk will be the one to take us there.

This is why I’m so excited about the next evolution of connectivity. It’s not some far off ‘I don’t know if this will work’ idea, like Musk’s mission to Mars. It’s something that’s already in the process of being rolled out.

In fact, you may have seen this rollout already…

A tangible opportunity you can invest in today…

Over the past two days, I’ve been talking about a new opportunity: a new evolution in connectivity.

This will be the third and last day.

The reason I’ve taken three days to talk about this is simple. I believe it could be huge! And I want you to understand how you could set up investments to benefit.

And like the first two, this next evolution might make new technologies and whole new income streams possible for Aussie businesses.

And that gives you a chance to benefit. IF you jump onto the right names of course.

The best part is you can benefit now from this opportunity. You don’t have to wait until 2024 or potentially years later to see gains from this idea.

In fact, you can walk outside your house today and see a tangible infrastructure, which will power this next evolution in connectivity.

Here’s part of it outside of the Sydney Opera House… Here’s another outside of Melbourne’s Flinders Street Station… 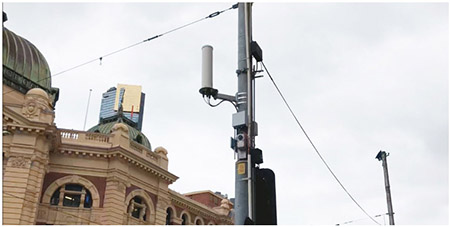 These strange looking antennas are like super connectors. They are the tangible infrastructure that makes this next leap in connectivity possible.

These antennas are going to be dotted across Australia. And with them remote surgery, driverless cars and a whole bunch of other futuristic tech could become possible.

So how do you benefit?

Maybe by investing in Aussie stocks involved in the rollout…

Or maybe you’ll stumble across stocks that become massive beneficiaries when this new network gets switched on.

If we look at last time something like this happened (2003), companies like US cable provider Comcast have almost become a four-bagger since that time. Aussie REA Group, the company that owns realestate.com.au, is up 410 times. And shareholders of wireless provider SBA Communications have seen their holdings jump 430 times.

I obviously can’t say for sure that something similar will happen this time. My crystal ball is about as clear as yours.

But there could be a few Aussie businesses that really benefit from this opportunity. And I believe I’ve found two…

It’s all about this opportunity: the next evolution in connectivity and how an Aussie investor such as yourself might profit from it.

Both of these stocks are relatively unknown small-caps, hence why the potential gain is far more than 100% or 150%.

Of course, there could be many more stocks to profit as the Internet 2.0 plays out. But right now, I think THESE two Aussie small-caps have a great chance to rise significantly higher.

You’ll be able to get your hands on this report at 3pm today.

I’ll send you an email the moment it drops. The subject line to that email will read: Get ready for…the hypernet invasion.

When you get that email, open it, read it and then click through. Again, there’s no cost to read it.

Our aim, as always, is to present readers of Money Morning like you with an opportunity that you’re not getting from the mainstream.

We know that not every investment idea from us is for you. But maybe the next evolution in connectivity is…and if so, then this brand-new report could be right up your alley.

Again, you’ll receive an email from me in the next couple of hours when this report is live.

PS: Download your FREE report by clicking here and discover a speculative resource bet for 2020 and beyond (hint: it’s not lithium).