Trading at $3.56 at the time of writing, the Qantas Airways Ltd [ASX:QAN] share price has moved up 74.15% from the March low, based on a series of moves that could be hinting at a recovery. 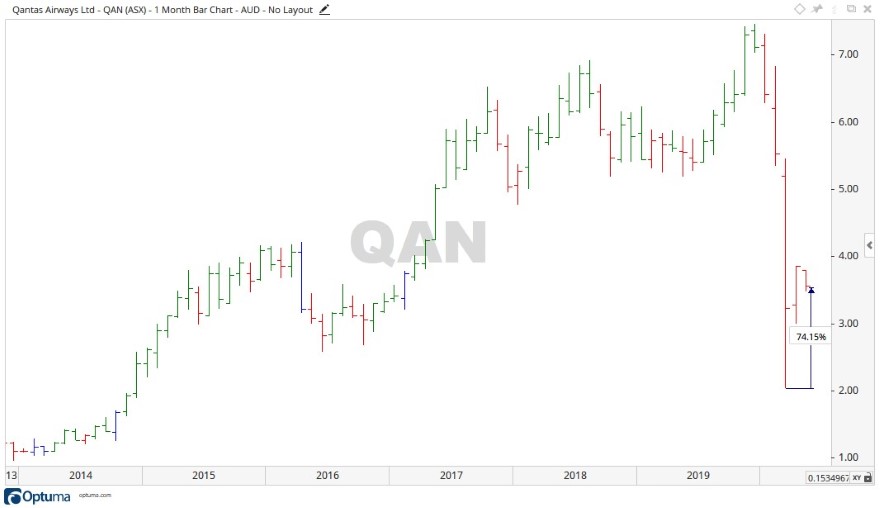 Travel halts hit Qantas hard, but perhaps not as much as others

Airlines and travel have ground to a standstill since the onset of the pandemic — and no operator has gone untouched.

With Lufthansa, Germany’s national carrier, staring down the barrel of bankruptcy, Air France-KLM recently being approved for a €7 billion bailout by the European commission, along with the collapse of Virgin Australia in recent weeks — it’s clear the aviation industry has seen better times.

Qantas for its part, appears to have moved swiftly to ensure it can deal with both the short-term and long-term impacts of COVID-19.

In an announcement made on 5 May, Qantas outlined that it had secured another $550 million in debt funding secured against three of its wholly-owned Boeing 787-9 aircraft.

‘Our cash balance shows that we’re in an extraordinarily strong position, which under the circumstances we absolutely have to be. We do not know how long domestic and international travel restrictions will last or what demand will look like as they’re gradually lifted.’

Two assets poised to benefit from an ongoing market downturn — get the report for free here.

Light at the end of the tunnel?

Both Australia and New Zealand have had a degree of success in ‘flattening the curve’ of the COVID-19 virus, in short, slowing the proliferation of the virus through society.

This has prompted the idea of a ‘trans-Tasman bubble’ which would allow international travel between the two nations.

With all other international travel closed for the time being, this could well be a way to test the waters.

It would also be a positive, if tentative, first step for Qantas. Looking to the charts, we see that Qantas has found resistance at the historical level of $3.87.

While this may have stopped a further move up for now, trading on the Qantas share price has seen stabilised volume of late.

With the airline industry still in crisis mode, it may be a bit too early to be predicting upside targets.

But considering the fate of some of Qantas’ international peers, having a floor put under it may signal a Qantas share price rebound in the months ahead.

If you are looking to protect your money during the ‘corona crisis’, check out this free report by our Money Morning analyst, in it he reveals a two-pronged plan to help you deal with the financial implications of COVID-19. You can read it here for free.

Tags: ASX:QAN
Carl Wittkopp
Carl Wittkopp writes for Money Morning and has a diploma in Financial Planning. He specialises in technical analysis.

The Future of ASX Travel Stocks like Flight Centre and Webjet

Qantas Share Price Recently Hit an All-Time High: How far Can it Fall?