Australian winemaker Treasury Wine Estates Ltd [ASX:TWE] saw its share price drop with the emergence of COVID-19 earlier this year, plummeting 56.86% into the March low from September 2019. Having now recovered marginally to $11.59 at the time of writing, Treasury is still facing some stern challenges. As with most things right now, TWE is going through the pain caused by the novel COVID-19 virus. In the case of Treasury Wines, the crippling effect the virus had on the Chinese economy caused the company to downgrade its earnings forecast.

Announced in February 2020, the company noted:

‘Whilst the full operating and financial impacts of the outbreak are yet to be fully determined, TWE now has sufficient information in its possession that would indicate consumption across discretionary categories in China has been significantly impacted through February, and that this impact on consumption is expected to be sustained to at least through March. As a result, TWE no longer believes that it will achieve the previously provided guidance for F20 reported EBITS growth of between 5% and 10%.’

Also impacting the company is the current class action taken out against Treasury Wines in the Supreme Court of Victoria. Being filed by Maurice Blackburn, the statement of claim includes allegations of contraventions of the Corporations Act in relation to continuous disclosure, and the Corporations Act, ASIC Act, and the Australian Consumer Law in relation to misleading or deceptive conduct. TWE has stated that it strongly denies the allegations and intends to vigorously defend the proceedings.

Where to from here… 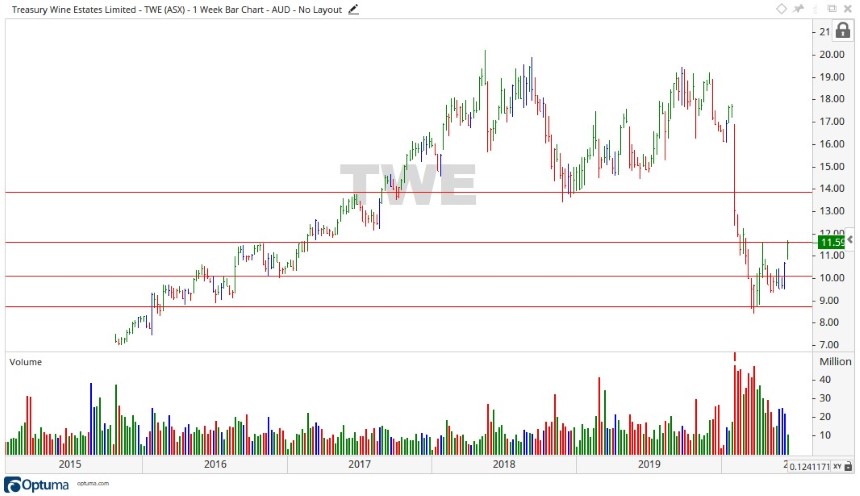 The massive impact of sales in China together with the class action could spell trouble for the recovery in the share price of TWE.

Taking the technical view of the company, the price is currently sitting at the historical resistance level of $11.62. Should it move through this level then $13.86 may come into focus. The current move up has taken place on decreasing trading volume and therefore may not be supported by the market.

If the price starts to fall away again to the downside then the levels of $10.19 and $8.82 may come into play.

Trading at $11.12 at the time of writing, Treasury Wine Estates Ltd [ASX:TWE] is facing serious headwinds in regaining growth in their share price. The impact of COVID-19 on the Australian wine maker is being felt in both the domestic and international market… Why Did Treasury Wines Plummet 6.37% Today?

The Treasury Wine share price has come under increased downwards pressure since Tuesday after being blasted by a high profile hedge fund manager at a New York investor conference.