Future of the Energy Market — The Green Energy Wave Is Coming 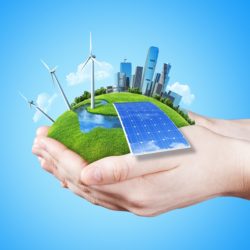 Overnight, US stocks finally got a reprieve.

After three straight trading days of losses, the market finally offered a reprieve. With tech stocks leading the recovery once more.

Where they will head from here though, remains a mystery. Leaving Wall Street on a knife’s edge between rags or riches.

But, that’s not what I want to talk about today.

Instead, I want to talk about oil. Or rather, the collapse of oil…

Because just like US stocks, it’s been a rocky couple of days for this key commodity.

On Tuesday (US time), Brent crude fell below US$40 for the first time since June. Squeezing traders heavily as concerns over demand began to surface once more.

Granted, like the stock market, we did see a slight recovery overnight. But the sector still has a long way to go before it can shake off the broader woes. Especially when the likes of OPEC and the US have had to put in place record supply cuts.

And according to Reuters, a forthcoming US report is anticipating more production cuts in 2021. Meaning, this is unlikely to be a short-term problem.

At least, that’s what the market is telling us as of right now.

Which begs the question, what will the future of the energy market look like?

Now, I’m not going to suggest that oil as we know it is done for good.

I can’t imagine demand for this commodity will disappear overnight. Sure, it may ease in certain markets, but that will just pave the way for other opportunities.

Having said that though, it is becoming increasingly clear that green energy is on the rise.

And what I mean by that isn’t that opinions or calls for renewables is growing. Because frankly, I’ve been hearing that argument for nearly a decade now.

We have yet to see ‘green energy’ really make any major strides to competing with fossil fuels.

So, why will this latest push be any different?

Well, while I may be dismissive of opinionated puff pieces, I find it much harder to ignore money. Because if my time scouring the markets has taught me anything, it is that capital is the real innovator.

Which brings me to my broader point; some governments are planning to throw some serious cash at green agendas.

For example, South Korea’s president recently unveiled the ‘Korean New Deal’. A framework that will work to guide the nation out of this COVID-19 slump and back into prosperity. In doing so, Korea will spend roughly $190 billion on new initiatives.

As expected, a large part of that money will be directed to technology. An industry that Korea is already renowned for and will only improve on.

However, more surprising is the fact that this ‘new deal’ has a green component. Aiming to boost Korea’s use of wind and solar power.

Plus, they’ll also introduce new technologies such as smart and micro grids. All of which will supposedly rely on renewable energy to sustain.

Not to mention setting a target for 1.13 million electric cars by 2025.

Korea certainly isn’t alone on this green agenda either.

Last week we learnt that France will be pursuing a greener future as well. Committing to a similar deal (valued at $162 billion) to prop up their economy too.

And just like Korea, a sizeable portion ($48.6 billion) will go towards funding greener energy policies. Once again, focusing on wind and solar — but also dabbling in hydrogen as well.

Suffice to say, that is some serious cash being pumped into green initiatives.

Proposals that I suspect we’re bound to see emulated in a whole lot of economies moving forward. Including the biggest of them all…

As we get ever closer to November, it is impossible to ignore the US election.

Even for someone who hates politics, especially the circus that is US politics, it is still mandatory to follow along. Not because I’m backing either Trump or Biden, but simply because whoever wins, the ramifications will be starkly different.

Nowhere is this more apparent than in energy/climate policy.

Under Trump, the longevity of oil may prosper for years to come. With his hard-line approach to US industry and desire to revive local manufacturing.

Conversely, Biden is proposing (virtually) the complete opposite. His US$2 trillion plan for clean energy projects is staggering.

Well, the sum is staggering at least.

When it comes to concrete details or specifics as to how this money would be used, things are still unclear. Which, obviously, should be taken with a little scepticism.

Until we know what this spending will entail, we can’t really conclude anything.

Nevertheless though, if Biden does win, it will be something to look out for.

So, for investors, what does this all mean?

For starters, I would seriously be careful about investing in oil right now. Because even if this green blitz fizzles out, I think we’ll see gas become a far more attractive option than oil.

But, I also don’t expect the green agenda will be as hollow as it has been in the past.

There is simply too much money behind it to ignore. Money that I expect will only continue to grow in size.

Even locally, in Australia, it is hard to ignore the signs.

Apparently, they want to make this venture the ‘Netflix of electric vehicles’. Providing users with a registered, serviced, and insured electric car for $299 a week. Which also includes installation of a home charging system.

That is a pretty indicative departure from AGL’s usual product offerings.