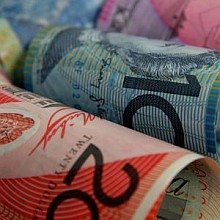 I was in the supermarket the other day searching for some snow peas and I realised that the only option I had was to buy a plastic bag filled with more snow peas than I knew what to do with.

I had a rant to a lady walking past about how annoying it was that they were shoving everything into plastic bags, upping the price, and forcing us to buy more than we wanted.

That’s when I realised I was turning into a grumpy old man.

So today I want to have a grumpy old man rant about something that has been annoying me.

There are a few trading products that I think are a blatant attempt by the big boys and girls to fleece the unsuspecting punter.

Our job here at Money Morning is to be in your corner rather than theirs, so I want to point out why I think you should stay away from them.

The BetaShares strong bear funds are leveraged short funds that move inversely to the price of the underlying index.

The one I will discuss today is the BetaShares Australian Equities Strong Bear Fund [ASX:BBOZ].

As it says on the BetaShares website: ‘A 1% fall in the Australian sharemarket on a given day can generally be expected to deliver a 2% to 2.75% increase in the value of the Fund (and vice versa).’

I have dabbled around in BBOZ and the BetaShares US Equities Strong Bear Hedge Fund – Currency Hedged [ASX:BBUS] in the past and have often been confounded by the way their prices moved.

Upon closer inspection it became clear why they move in the way they do, and I marvelled at how clever the idea behind the product was. It was a case of heads I win, tails you lose.

It is the leverage inherent in the product and the shifting denominator that stacks the odds against the person buying BBUS or BBOZ.

Let me give you an example.

Let’s imagine that the price of the underlying instrument that BBOZ is based on bounces around between $18 to $20.

What do you think will happen to the price of BBOZ in that instance?

Then when the price of the underlying falls 10% from $20 to $18, the price of BBOZ will jump only 25% above the new lowered price, which is an important point.

If the price of the underlying bounces up and down between $18 to $20 multiple times, the losses on BBOZ become substantial.

The price of the underlying would be exactly the same as when you first bought BBOZ, but you would be down 18.5% on your BBOZ investment.

It is a product that will lose you money if the market moves sideways or up. The only chance you have of making money is if the market trends down.

Even then you had better be quick because if the market falls far, the adjustment in the denominator for calculations will quickly hurt you on a bounce.

Comparing BBOZ to the ASX 200

Let’s have a look at an example using the actual data for BBOZ and its underlying index, the ASX 200.

We’re going to imagine that you are a gun trader who bought BBOZ at the exact high in the ASX 200 prior to the COVID crash.

Your trade was an absolute killer.

Break out the champagne and call all your friends to let them know what a genius you are.

But then the market started bouncing and less than three months later on 9 June, the price of BBOZ crashed back to your entry price. But you’re scratching your head because the ASX 200 is still 15% below the all-time high?!? (Compare the two black lines in the above chart.)

You should still be swimming in cash. What on Earth is going on?

You are confident of your genius even though you feel gypped by the fact the price of BBOZ has collapsed. You hold on to your brilliant BBOZ trade and watch in horror as the ASX 200 returns to the price where it was when you entered the trade, but you are now down 39% on your investment. (BBOZ traded at $4.90 on Monday.)

When your friends ask you how you went, just tell them you dumped it for a massive profit.

I don’t think I can make a clearer example of why I think these products are built to enrich the wealthy at the expense of the rest of us.

The odds are stacked against you as a trader to begin with. Having the odds moved even further away from you is not a great idea. My advice is to stay away from products like this unless you fully understand how they move and accept the risks.

If you were confused by my explanations above then feel free to watch this short video where I explain it for you using my charts:

Have a good weekend!

What Not to Do: Thinking about a Crash Versus Planning for a Crash

BBOZ Fees Comparatively Expensive and the Outlook for Shares

Yes, there is an immense amount of stimulus in the system, and the financial system is looking strained. But the surging interest in BBOZ may have fooled some novice investors. The thinking is, well a crash happened, and the worst is yet to come…

Think the Market Will Crash Again? A Look at the BBOZ Price (ASX:BBOZ)

The BetaShares Australian Equities Strong Bear Hedge Fund [ASX:BBOZ] is a managed investment fund with units trading on the ASX. It is a bear fund, meaning its aim is to help investors profit from or protect against a declining market…