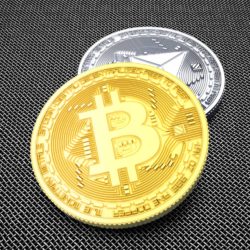 In today’s Money Morning…the road to becoming an institutional asset class…a fringe investment, despite the media attention…keep that in mind when looking at the ‘price’ of cryptos…and more…

I don’t need to tell you that it has been a rough week for cryptocurrencies.

With this volatile market enduring a harsh sell-off as concerns spread throughout the media.

Whether it is Elon Musk’s flip-flopping on crypto viability, or yet another supposed Chinese crackdown on crypto trading and miners…maybe even scepticism about whether the ‘institutional money’ that is so often discussed isn’t actually flowing into the market…

Truth be told, it could be any number of things. Because honestly, it doesn’t take much to move crypto markets.

They’re regarded as highly volatile for a reason. And we’ve seen steep gains followed by steep losses plenty of times in the past. With late 2017 practically mimicking 2021’s boom and bust to a tee.

Which no doubt begs the question, should you be worried?

The simple answer, as Lachlann explained in yesterday’s article, is no.

Crypto isn’t going to disappear that easily, and it would be stupid to think otherwise.

In fact, right as the crash was unfolding, that institutional money people always concern themselves with, was buying — not selling.

Exchanges that are known for their institutional ties, such as LMAX Digital, achieved record trading volumes. Peaking at US$6.6 billion on 19 May — right when the price of Bitcoin [BTC] plunged to US$32,974 before swiftly rebounding to US$40,231 in a matter of hours.

And perhaps most importantly of all, a leaked Goldman Sachs report suggests interest in cryptos is only growing…

The road to becoming an institutional asset class

Now, let me just preface that I find it hard to believe that this report was ‘leaked’ by anyone but Goldman themselves.

The timing and nature of its content is just too convenient. Especially when it is titled: ‘Crypto: A New Asset Class?’

A fairly foregone conclusion for anyone who even remotely understands how bitcoin and other cryptocurrencies work.

Nevertheless, Goldman’s prerogative is on institutional money. Unconcerned with the riff-raff of retail investors. So, the fact that they’re seriously discussing whether crypto is fit for these ultra-rich investors is very important.

Especially when the discussion within this report was released on 21 May. Just as the crypto market had cemented its recent downturn.

Like I said, the timing is a little too convenient for my taste.

Not that I’m trying to suggest any sort of blatant market manipulation. Although it would certainly be possible given the relatively small and unregulated nature of the crypto market.

However, the more interesting conclusion to come out of this report is how favourable it is towards Ethereum. Putting forth a myriad of views on why the second-largest crypto could usurp bitcoin’s dominance.

As Mike Novogratz notes for an interview contained in the report:

‘The three biggest moves in the crypto ecosystem—payments, DeFi, and NFTs—are mostly being built on Ethereum, so it’s going to get priced like a network. The more people that use it and the more stuff that gets built on it, the higher the price will ultimately go.’

Suggesting that perhaps the flood of institutional money may flow into Ethereum [ETH], rather than bitcoin.

But Goldman’s report doesn’t rule out bitcoin entirely. Noting that it is quickly proving itself as a lucrative, albeit volatile, store of value. Something that is increasingly important as we’re seeing the obscenities of fiscal and monetary policy proliferate.

Something that you can learn all about from a recent discussion between our own Ryan Dinse and Greg Canavan.

Because for you, dear reader, as an everyday investor, the real takeaway is that it is still early days for crypto. Despite what the recent market moves may tell you…

A fringe investment, despite the media attention

See, despite what you may see or hear from the media, even from us, crypto is still very new.

It is a market that has only existed for a little over a decade now. Growing rapidly over that time for sure but has still yet to reach a point that I would describe as a mature market.

Indeed, we’ve seen plenty of times where bitcoin has endured a steep price crash. A catalyst for all the doubters and naysayers to say, ‘I told you so’.

In reality, it would be more concerning if we didn’t see these kinds of pullbacks and corrections.

Unbridled growth (in any asset class) is cause for concern. A sign that something untoward may be happening behind the scenes.

Because in all honesty, the price of bitcoin is in many ways a measure of trust in blockchain. An indication of investors’ belief that this decentralised system can truly work. Which, so far, has dealt with every punch that critics have thrown at it.

And every time it does, it converts a few new people to finally ‘get it’.

Even Greg, our own Editorial Director, is only a recent crypto believer. Albeit, he is far more interested in the blockchain technology than any particular cryptocurrency.

But that’s beyond the point.

The fact is, he is still early to the party. Just like anyone else who has only recently delved into crypto assets.

Because even prior to the recent crash, crypto was still a small market. As the Goldman report emphasises:

Indeed, when it comes to actually investing in bitcoin, rough estimates suggest participation is low. With our best estimates calculating around 100 million bitcoin owners worldwide.

In the US alone, a little over half the population owns some number of shares. Which equates to more than 164 million people. A larger cohort than the global total of crypto investors.

And while the total crypto market may be worth US$1.75 trillion, it is still small. Especially when you consider the fact that bitcoin accounts for 42% of it.

A single coin that is simply the prototype for a much more complex and fascinating future. Where ideas like smart contracts, decentralised finance (DeFi), and non-fungible tokens are being explored by much smaller projects.

Projects that could one day surpass bitcoin and become foundations for entirely new industries. Each of which could attract plenty of institutional investor interest.

So, just keep that in mind when looking at the ‘price’ of cryptos.

Because despite what it may seem, we’re still in the early adoption phase of this revolution.