Core Lithium [ASX:CXO] shares are up more than 7.5% at time of writing after providing an exploration and drilling update on their Finniss Lithium Project.

Core Lithium is an advanced lithium developer. Their flagship project is their 100%-owned Finniss Lithium Project, which is located near Darwin, Northern Territory.

Over their last drilling season, Core focused its exploration efforts on mineral resource growth and conversion and regional exploration to extend mine life along with laying the foundation for production expansion at Finniss Lithium Project.

The results they released today were from drill samples taken from Bilatos and other southern regional exploration targets, as you can see in the image below: 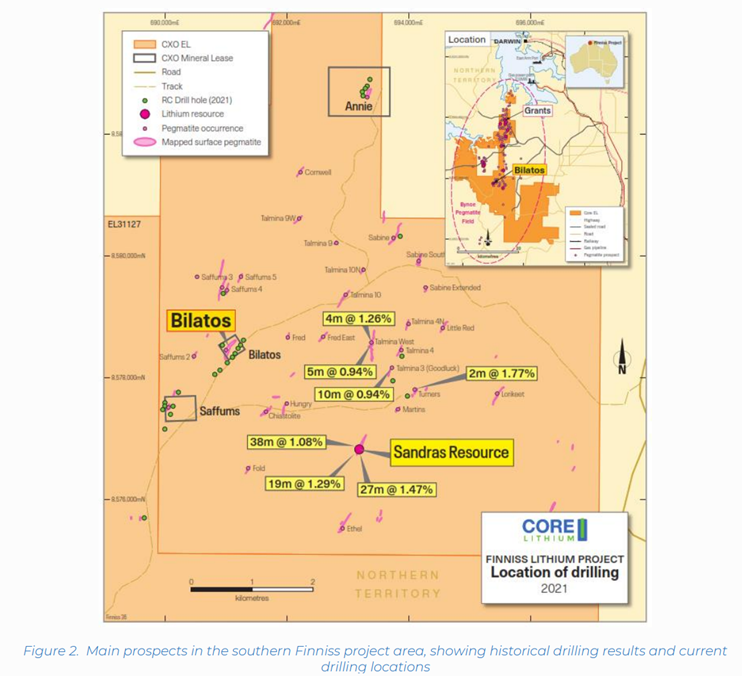 At Bilatos, they completed 10 reverse circulation (RC) drill holes with most intersecting ‘significant lithium grades and consistent thicknesses of pegmatite’.

Core expects to receive additional exploration and resource drilling results in the next coming weeks and are planning an active exploration drilling program at Finniss in the coming months.

Core Lithium plans to produce their first lithium from the Finniss project in the fourth quarter of 2022.

Over the last 12 months, though, Core’s share price has increased by a whopping 518% after getting a boost from signing deals with Tesla and GangfengLithium to supply both companies with lithium spodumene concentrate from their Finniss Lithium project.

If you are interested in lithium stocks, check out our new report ‘Three Overlooked ASX Lithium Stocks that Could Soon Rocket Higher on the Fast-Growing EV Revolution’.