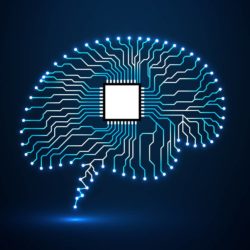 BRN shares rose as much as 5.5% in early trade before subsiding well into the afternoon.

At the time of writing, BrainChip shares are down 4%.

Despite the slump today, the stock is up 80% year to date, although BrainChip is still trading 45% below its all time high posted in January. Hoping investors will see BrainChip in the same vein as past innovative tech businesses, Mr Viana talked up the disruptive heritage of tech companies past and present:

‘For those who know the tech space, there is nothing better in tech than being on the front end of disruptive technology introduction.

‘Atari experienced it with gaming. Motorola with pagers. Nokia/TI/Qualcomm with cell phones, ARM with microprocessor IP … there are many examples.’

For Mr Viana, BrainChip’s AI technology has the potential to be yet another disruptive force:

‘Neuromorphic processors coupled with edge based AI is yet another disruptive force coming onto to the market.

Despite his enthusiasm for BrainChip’s underlying technology, Mr Viana was pragmatic about BrainChip’s commercialisation path.

Rivals can crash a first-mover’s party by rolling out a product better serving customer needs:

‘With Bluetooth of the late 90s, the lesson learned was being first doesn’t necessarily mean you win… When I was at ARM, I sold licenses to the 1st 3 Bluetooth players to reach the market with proven silicon…all 3 companies either folded or were bought out.

‘These early players focused so hard on their solutions, they forgot about ecosystem development and integration concerns … this led to delays in adoption and opened the door for late comers with more robust total solutions to win the market.

‘There is no question that BT was (and is) a complete game changing technology that finds itself truly everywhere today…but it wasn’t a financial winner for the early players.’

The strategy focuses not only on research, but also productisation and commercialisation.

To that end, Mr Hehir cited Michael Dell of Dell Technologies, who predicts that while 10% of data is now generated at the edge, that will shift to 75% by 2025: Now, while BrainChip has managed to withstand the tech sell-off in recent months, the wider tech industry is reeling from economic conditions no longer favourable to concept stocks whose profitability is years away.

But there are other stocks out there that can benefit from the current conditions.

Rising inflation, continued supply chain bottlenecks, and rising interest rates are about to set us off on a new axis shift.

Those who can anticipate the axis shift stand to gain.

Veteran strategist Jim Rickards thinks he has the new axis shift covered…and he’s got the investment ideas he thinks can leverage it.

To hear more from Jim, access his thoughts here.