Despite the sharp drop today, ORG shares are still up 45% over the past 12 months, boosted by sustained high energy prices: 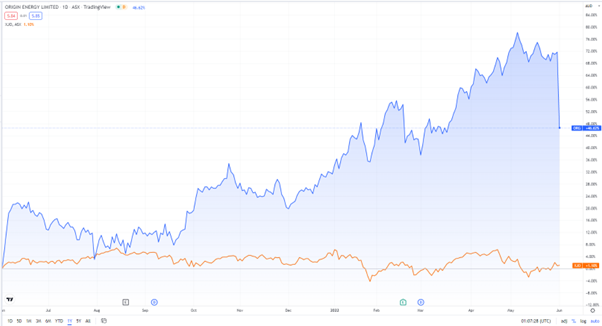 The scrapping of the guidance comes after ‘material developments in global and Australian energy markets’.

Origin explained current volatility in energy markets has risen to a level that clouds earnings visibility.

Guidance for the fiscal year 2023 had previously included Energy Market Underlying EBITDA reaching between $600 to $850 million, a guidance that has now been withdrawn:

‘There is currently extreme volatility across commodity markets, driven by a combination of global energy supply and security concerns, exacerbated by the impact of the Russian invasion of Ukraine, with subsequent unprecedented increases in international energy prices including coal, gas and oil.

‘Origin will continue to assess the outlook, with a view to providing an update at full-year results in August.’

Origin has kept its 2022 financial year guidance, though:

Taking coal freight issues into account, Origin anticipates Energy Markets Underlying EBITDA in FY2022 to be lower than its initial estimation of $450 to $600 million, to a new estimate of around $310 to $460 million.

Coal supply issues are expected to escalate and continue into 2023 — despite the company’s efforts to secure extra coal by rail — with coal supply shortages potentially limiting the output of its 2.8GW Eraring plant in NSW.

Origin also warned of rapid escalation in wholesale electricity prices caused by the outages in coal plants and a further upswing in gas prices.

As James Thomson pointed out in the Australian Financial Review (emphasis added):

‘The company has promised to update its outlook at its results in August, but investors appear to have jumped to the obvious conclusion — if Origin is struggling to predict its own profitability, what hope do investors have?’

If Origin is constrained in the amount of coal, it can bring it via its hampered rail network, then it will have to resort to the spot market to meet customer demand, meaning higher prices.

These high energy prices have spotlighted again and again the need for consistent, cheap, and renewable energy sources.

But that’s easier said than done.

To hear more about the stock and Ryan’s analysis, read on here.