AZL wasn’t the only lithium stock to fall, however.

At the time of writing, Lake Resources is down 14%, Core Lithium down 7%, Sayona Mining down 7%, and Novonix down 6%.

In the past month alone, AZL is down nearly 40% as the lithium sector cools. 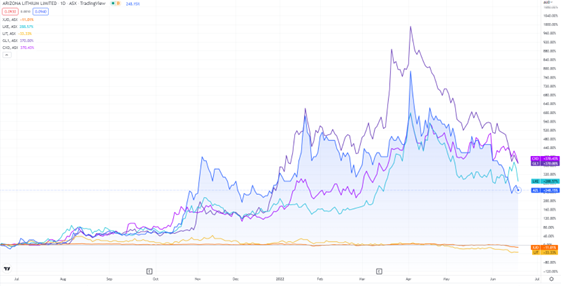 The lease will last five years, in which time it will function as a ‘technology incubator focused on the extraction of lithium from a variety of ores and brines’.

The centre will also be used to produce ‘battery-grade lithium chemicals for current and future battery technologies’.

AZL’s CTO, Brett Rabe, which the company emphasised has the relevant management and engineering experience, will lead operations.

The company said EV-specific lithium companies, US-based investors, and government officials have taken interest in the facility, and that the centre will assist in development of the company’s Big Sandy and Lordsburg Projects.

‘We are delighted to announce the lease for this world class Lithium Research Center in one of the top destinations for EV and battery production in the world. We are already significantly advanced in the design of the facility and are currently procuring equipment, with staff recruitment also underway. We look forward to working with ore from the Big Sandy resource, and I am confident that the AZL Research Center will act as a hub for technological advancement in the lithium industry and strategic collaborations.’

‘We will use this Research Center to refine our flow sheet based on the previous test work undertaken by Hazen Research, and also explore new technologies. With the recent appointment of Brett Rabe as Chief Technical Officer, we have a fantastic leader for this project, and we are excited to see it in operation later this year.’

Lloyd believes AZL’s lithium research centre is a smart move that can pay off in the future:

‘Today marks a significant milestone for the development of Big Sandy and for what we believe to be the lithium industry as a whole.

‘We have signed a long-term lease for the development of a Research Center that will initially test the Big Sandy ore body, but we expect will ultimately test other lithium sources and become a center for innovation within the lithium industry.’

Now, despite the sharp corrections sustained by many ASX lithium stocks, the forces behind the lithium megatrend remain strong as the world continues its green push.

For instance, Anson Resources recently announced that lithium battery production is expected to multiply 10 times by 2025 and 17 times by 2030.

And you had the Biden Administration pledging US$20 billion in low-interest loans in support of the US transition to alternative energy and lithium supply chains.

And as Benchmark Minerals recently noted in its rebuttal of Goldman Sachs’ bearish stance on the lithium sector:

Now, given that Benchmark expects lithium demand to remain strong for the foreseeable future, which stocks stand to benefit?