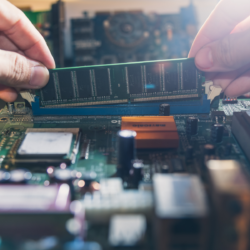 Memory-technology developer Weebit Nano [ASX:WBT] revealed it will demonstrate its ReRAM module technology to the public.

WBT shares rose as high as 18% on Tuesday. Memory-tech developer Weebit Nano announced that it will showcase its Resistive Random-Access-Memory (ReRAM) to the public for the first time at an industry event today.

Weebit hopes the demonstration will highlight its technology’s ‘real-world capability as a non-volatile memory (NVM) integrated into an actual subsystem.’

How will it do that?

‘The Interactive demonstration at the Leti Innovation Days event will show Weebit ReRAM functioning as an NVM memory block, being fed live images and retaining this data while powered off, then displaying the data separately.

‘The demonstration will also show the speed of the ReRAM module, clearly highlighting its faster write speed compared to typical flash memory technology.’

The company will also be demonstrating how its flash memory technology works, explaining that the ReRAM module has been programmed with faster writing speed in comparison with commercial flash memory.

‘This is the first time we are publicly demonstrating our ReRAM embedded in silicon, less than a year after taping out the module.

‘The demo of our ReRAM technology represents yet another key technical milestone as we progress toward full productization [sic].

‘The demo will be a great asset for use in our sales activities with potential customers.’

Why did WBT shares spike on today’s relatively brief update?

Investors may have seen in Weebit’s willingness to demo its technology publicly a sign of confidence in its product.

If the company thinks it’s ready to showcase its wares to a scrutinising audience, chances are it’s progressing well with its product development.

Now Weebit must secure potential customers and whip up commercial interest in its ReRAM tech.

Weebit shares then crumbled when the company announced its half-year results in ‘significant technical and commercial progress.’

Weebit is one small ASX stock wishing to burst on the international scene by aiming to develop innovative technology.

But WBT isn’t the only Aussie small-cap with such aims.

The ASX is home to many small caps wishing to upend established industries with disruptive products.

In a recent report, our small-cap experts have profiled seven such Aussie stocks, including one they call lithium’s little brother.

Click here to read on about the seven stocks!

ResApp Shares Are Soaring 24% Higher Thanks to a Takeover Bid from Pfizer!

Tiny HealthTech stock ResApp Health [ASX:RAP] is flying today. The share price is currently up 24.4% at the time of writing, thanks to a somewhat unexpected turn of events Weebit Nano Shares Slide 8% — Should Investors be Worried About its Growth Prospects?

By all accounts, Weebit Nano Ltd [ASX:WBT] is one of the biggest winners of 2020. Its ReRAM memory has captivated the market’s attention. This is underpinned by the strain that the pandemic has placed on all our digital systems and devices.

At time of writing, the share price of Weebit Nano Ltd [ASX:WBT] is down 10%, trading at $0.027 per share. The latest news out of the company is that it has completed successful endurance results of its ReRAM cells.